Last weekend, I organized and participated in Seattle’s satellite “Dark Side of the Jam,” a space-themed game jam which the Academy of Interactive Entertainment graciously agreed to host. Our mission was to build a game (using at least one NASA asset) in just 48 hours.

Our satellite jam started at 6pm on Friday, with participants filing in until around 7:30. We kicked off the event with some inspirational words by Dan Dixon, the creator of Universe Sandbox, and then started brainstorming ideas. As more people arrived, we decided to split into two teams, but to let everyone collaborate between the two projects (especially our artists and sound designer!).

We tossed around a number of exciting and ambitious ideas, from a game about discovering exoplanets with real-world problem solving elements (along the lines of Foldit) to one about engineering your own rockets (think Kerbal Space Program).

Two projects gathered the most attention and excitement, though. One was a game about driving the Lunar Rover around to pick up your astronaut bros. The other, and the one I worked on, is called Seven Minutes to Heaven. The game is about the time delay involved in communicating with a rover on Mars. While that delay can range from a couple of minutes to nearly half an hour, the name is an allusion to Curiosity’s Seven Minutes of Terror. 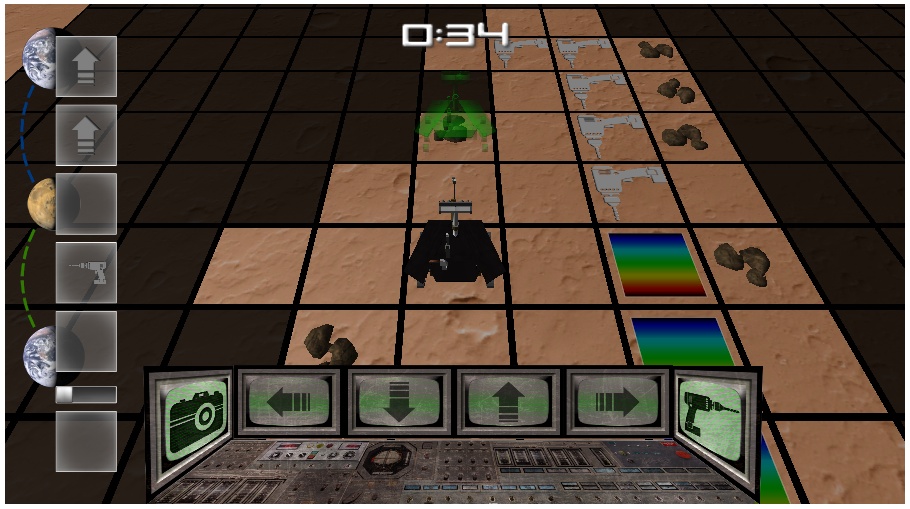 The game is played by selecting commands from the control panel’s arrows to drive the rover, a camera to get a better view of the surrounding area, and the drill to take a sample from the surface. The objective is to search for elements of interest (Hydrogen, Helium, Carbon, and Oxygen) within the time limit. The amount of each element in a square is communicated through an emission spectrum. The player can cross-reference this against known spectra to make decisions about where the most productive areas to drill are. It’s a little like Minesweeper, if you had to wait a while for your moves to take effect, the numbers were in code, and you only had until the sun goes down to finish playing. Also it’s on Mars.

Because we only had 48 hours to build the entire game, some features did not make it into the finished product before the end of the jam. With more time, we would have given players specific objectives (for example, find at least 6 units of Carbon and 2 of Helium) and better explained the controls and emission spectra in-game. We also didn’t get in all the art and sound effects produced by our teammates, or have much time for testing and play balance.

Even so, I’m really proud of how complete and polished the game ended up. More than that, I had a great time getting to know and work with a bunch of awesome people.