By the way, I haven’t forgotten about Rare Earth! A new update (v0.7) has been submitted to Microsoft for certification. What’s in store? 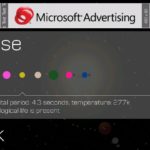 *The ability to start a new system was around in v0.6 – after a star died, a “new game+” option opened up in the About menu – unfortunately, it seems like it was way too hard to find! This update makes reincarnating a star an in-game event, and allows players to carry over life from one star to the next.

Voyager is now available to download on the Windows Phone Marketplace!

Get it today (it’s absolutely free), and be among the first to play what some are calling “The smartest game about flinging things at things since Angry Birds: The College Years. Oh, that’s not a thing? Yeah, this is the smartest one, then.”